Where in the Hell was I?

Smartphones are used for everything in our lives, including guiding one around a strange city in a strange country.  Generally, these devices work in many parts of the world.

But, recently I traveled to Italy, to the Tuscany Region, and multiple GPS or Global Positioning units let me down.   One said, “Turn left” another “turn right” and sometimes a third would say “go straight.”

Italy is a beautiful place to visit with wonderful coastlines, mountains, older cities and villages.  There are so many things to do one can become lost in first one diversion then another.    Personally, I love the language as it is musical and full of emotions and passion to my ears.

The Italian Tuscany landscape is one someone can get lost in, both literally and figuratively.

Now, I had just used my GPS units in Prague, the Czech Republic for a few days, before the trip to Tuscany.  All GPS units had performed admirably, showing correct paths through a city founded circa 9th century and one that had reestablished its democracy November 1989 when the Soviet State gave up its sweeping hold on that part of Europe.  (By the by, Prague is fabulous with wonderful food, beer, and pastries)

A picture from the river, Vitava.

Therefore, I knew the GPS units’ hardware and software were all functional. (I had a handheld unit as well as my Smartphone)

My family had a one day trip planned for Sienna to meet a guide for a walking tour in the Old Town, Siena Centre, founded by the Romans circa 30AD.

Very notable is the twice a year horse race called the Palio of Siena.  Though the race course is only some 2 minutes in length, the 17 Contrades or districts plan for and celebrate the race with huge passions.  One race is July 2nd and the other August 16.  This takes place in and around the Piazza del Campo, the heart of Siena.  Many more people are packed into this city than can reasonably be expected during this race.  It is huge for people from Siena, other Italians, and the world.
You can view it via the internet, and I have every expectation of watching the next one.

This is Torre del Mangia in the fan-shaped central square, Piazza del Campo, around which the horse race takes place.

So, what is my story you ask?

On this given day, our car had 4 smartphones, one handheld GPS, one car Navigation system.  We had a destination given to us by our tour guide, the so-called Stadium Parking, Fortezza-Stadio.  This is a large landmark and should have been easy to find.  Our GPS units readily identified it and carved a path through the city to connect with it.

But, that was the problem.

You see, Siena Centre has mostly walking areas, where cars have limited access.  There are signs and cameras to warn and identify a car that has been inside for too long or in the improper areas.

This we learned too late from our Tour Guide.  (No doubt, I will receive a nice mailed invitation from the city to make a large donation for my ignorance)

So, into the city center, we went, going from broad avenues to ever smaller ones.  I was getting quite nervous that we were on the wrong path.  So, another GPS locked into the Fortezza-Stadio parking lot.

Though it differed slightly from the first GPS, it still resolutely pointed the path we were on.

I was driving very slowly as there were many tourists that seemed too willing to jump into the path of our rental car.  Ok, I had insurance, but hitting someone would ruin the day for us, possibly them.

This type of driving seemed to be taking forever, though I have no clear memory of how long we were on this path.

But, the tensely filled drive ended when an Italian policeman appeared out of the crowd, holding his hands in a manner that I knew I was in trouble…

I stopped the car, and he tested my Italian, which is weak.  He switched to English, and I responded.  (His English was quite superior to my Italian)

Basically, the conversation was “you are in the wrong place and you will have to back up”.

Back up?  Hell, I just drove up a squirrel path!

He went to the rear of the car to begin guiding tourists away from the car, and hand signaled me to back up.

I endured this rearward driving for at least a quarter of a mile until he found a location where I could turn the car around and drive it forward.

In his best English and kindest manner, he asked me where I was going, and then gave me directions how to get there.  None of us in the car caught everything he said, but I had seized on turning right at a flashing light.

We thanked him profusely, proceeded on our way, I looking for my flashing light to turn right at.

I never ever saw a flashing light, we never turned right properly, and the rest of the car was just as lost as I!

We turned to our ever trustworthy GPS units.

Lo and behold, after 15 minutes or so, we began to recognize buildings and landmarks.

It is not possible!  We were right back on the same path!

At our previous turn around point, I looked around and saw our friendly policeman.

I waved at him, and shrugged my shoulders, spinning my hand around, indicating we were lost again.

The policeman approached the car and in very terse Italian probably called me everything from an Idiot to a dumb tourist.  He was correct in this situation.

I wondered where our pleasant and English speaking policeman had gone and why this angry man looked so much like him.

I asked him to switch to English, and in Italian he clearly said,

“You did not understand my English, so Italian is all you get!”

Oh boy, pissing off a local cop is not a good thing.

He told us to park the car and call our guide.

Our guide had to take a taxi to us and arrived in ten minutes or so.

She led us to the parking lot Fortezza-Stadio as easily as following a railroad line.  She did not use a GPS.  She told us patiently, that GPS units were not trustworthy in the old city.  After that, in three different cities, we were told GPS does not work well there either.

Now, they tell me?

Did the Russians hack my units?  Or, did they hack the GPS satellites?  Was it little green men that wanted to laugh at me?

Perhaps, it was the devil trying to get me tense and cussing?
Well, I was and did.

We left our car and the GPS units behind, taking only our Smartphones.

As she led us through the city remarking about the history of this or the importance of that, I marveled at her knowledge and her command of English.

But, I also worried about seeing my once friend, the policeman.

I asked her to give me a quick course on Italian so if I saw him, I could approach him, present my apologies and thank him for his help.  She did.

Would you believe we came across my policeman not ten minutes later?

He saw me as I saw him, and I could see darkness forming in his face. He was surrounded by three friends and they were laughing with him.

No doubt, the source of the humor was me, the dumb tourist.

I immediately told our guide, “That is him” and started walking towards him.

I held my hand out in what I hoped was one of a friendly greeting, and we began to dialogue with our guide acting as translator.

He willingly accepted my apology, grabbed my hand, and the friendly policeman returned.

He asked me where I was from.  I said, the USA.

He suddenly looked dumbfounded.  He grabbed me in a bear hug, lifted my feet off the ground and repeatedly said in a loud voice,

At first, I thought he meant Obama, but the timing was not correct.

Through translations, I found out that the illegal immigrants forced upon Italy was causing heartburn for everyone, and financial hardships.

“You have our president, and we want him!”

Wow, I had to travel part way around the world that actually liked Trump!

It turns out he had quite the good humor and friends.  You can see one friend in red past me laughing.

Why do I think he had a sense of humor, you ask? 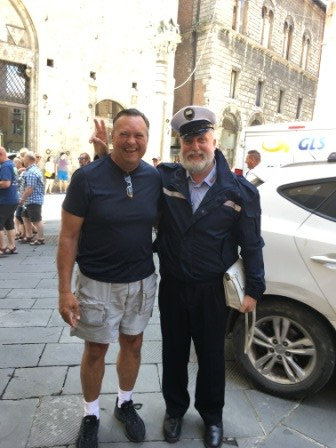 I have little doubt that that is NOT a peace sign he has formed over my shoulder.  It is likely a way to label, “this is a dumb tourist’.

So, what did I learn?

Never ever depend on a GPS to “get you there” in Italy at the spur of a moment.

Do some research, know things like limited driving roads, limited parking, just in case.  After all, any city that has been around since before the invention of the horseless carriage is quite likely to have small streets and limited parking.

And, for God’s sake be respectful of countries traffic and patrol officers.