Available with a new covere in ebook and paper. 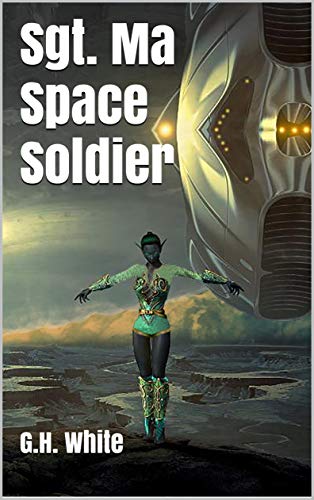 Cover  by Gary Orona.
An intriguing and unique story. The characters are well-drawn and the plot flows quickly.

Sgt. Ma is an eight-foot genetically enhanced female soldier who dreams of moving from her Planet’s Militia to the All World’s United Armed Services. (UAS) She thinks she will look great in the uniforms.

Her enlistment is initially refused as she is larger and stronger than her Earth Counterparts where she is described as “bigger than a Buick”.

With resentment guiding her, she begins to sabotage the enlistment camp causing a variety of problems for the soldiers located there. One very ill, but smart Ensign Clinton, begins to understand she might be behind their troubles and orders her enlistment.
Her first plant fall assignment after enlistment is Rigel 2, where she is to fit into her new squad. She brings her electronic and sabotage skills to bear successfully rooting out local terrorists.

Colonel Haskell learns of her abilities and asks her to try for a planet-level rescue of peaceful aliens that likely would be dangerous and a one-way trip. She is partnered with Sgt. Little Freddy, who is a sexist and racist, she fears they may kill each other rather than the bad guys.

This site uses Akismet to reduce spam. Learn how your comment data is processed.